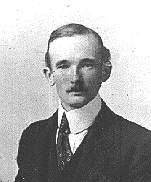 According to his attestation papers dated December 2, 1915 at Toronto, Louis Bradbury, of 114 Helens Avenue, Toronto was born on January 13, 1888 in Nottinghamshire, England.  He listed his wife Florence Bradbury of 114 Helens Avenue as his next of kin.  He was a Gardener and had no previous military experience.  He was 27 years and 11 months of age and stood 5 feet 2 inches tall.  He had blue eyes, brown hair and a fair complexion.  He had a mole on his left abdomen.  He was a member of the Church of England.

Louis Bradbury was a member of the 19th Battalion, Canadian Infantry (Central Ontario Regiment), when he died on April 17, 1917.  According to the CEF burial register he was "wounded in the abdomen by shrapnel just before the commencement of the attack on April 4, 1917.  He was evacuated to No. 22 Casualty Clearing Station where he succumbed to this wounds".  He is buried in the Bruay Communal Cemetery Extension, Pas de Calais, France. 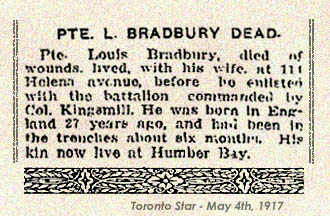 Louis was an employee of the City of Toronto and as such his name appears on the Memorial Tablet in the entrance lobby of Old City Hall.
Posted by Michael Harrison at 6:07 AM

Town of New Toronto - Soldiers of the First World War

Town of Mimico - Soldiers of the First World War